Some dear relatives-by-marriage of mine hosted us for the Thanksgiving weekend in a warm place.

For Thanksgiving dinner, in addition to my husband, kids, and me, they invited some friends. Twice during the day Thursday, I asked what time people were coming over. The first time, I didn’t get an answer. The second time, I was told that the turkey should come out of the oven at 5:30, so we’d probably eat at 6:30, and that the guests would come over “whenever we tell them to.”

I went for a run, came back to an empty house, and took a shower.

So at 5:00, I was in the kitchen slicing crudités, in strange comfy clothes, with wet hair half up on my head, and wearing no mascara. My husband was still at the beach with the children, one of the hosts was on the lanai, smoking and still wearing golf clothes, and the other was in the shower…

… and the guests walked in.

They’d been told several days earlier to arrive at 5:00 on Thanksgiving. They could tell that we weren’t ready, and they appeared to be quite uncomfortable. Of the 6 adults involved in dinner, only half of us seemed to be bothered by this mixup, failure-to-communicate, lack-of-modification-of-original-instructions, whatever it was.

Surely an unusual situation, right? And those of us who were unsettled should maybe just lighten up?

Well, no. One story, two messages:

The first message: This kind of thing happens ALL THE TIME in construction communications, and in… well, let’s put my personal life aside. It shouldn’t be happening. Construction documents must communicate clearly.

Sometimes, the Instructions to Bidders document will list one time, date, or location for the bid opening, and another procurement document will indicate another. (Oh, well, it was a typo, no big deal, right? WRONG! These are legal documents! Seemingly tiny conflicts like this could cause a project to have to be bid all over again, or worse! Architects or Owners must check for consistency before issuing documents like this!)

Sometimes, General Notes on the drawings might indicate different window treatments than the rest of the drawings and the specifications show. (Oh, but we talked to the Construction-Manager-as-Contractor about the roller shades; he knows we don’t want those horizontal blinds that the General Notes mention, so it’s ok to just leave that note, right? NOOoooooo! Of course it’s not! It’s not ok to knowingly issue documents with conflicts in them! How are the bidding subcontractors supposed to know what the design team wants? What if they only see the General Notes, and not the drawing notes where what is actually desired is called out? Architects must make sure General Notes on the drawings are relevant and correct.)

Sometimes, drawings will call out storefront, but the specs have a section for curtain wall instead. (But the bidders will figure it out, right? NO!!! Storefront and curtain wall are different things. Architects have to make the documents clear, so as not to waste the bidders’ time, and their own time, during bidding, answering the inevitable question. Architects must ensure that the drawings and the specs are coordinated.)

The dinner guests were not able to divine that, although they had been told to arrive at 5, they should actually show up an hour later, because the host got distracted by family fun at the beach, changed her mind about what time she wanted to receive guests, and failed to tell them to come later than previously indicated.

Bidders, or the constructor, will not be able to know what’s in the sketches or project notebook on the architect’s desk at the office, or what conversations the architect had with the owner two months ago. All that the bidders have to go by is the construction documents. These have to tell the whole story. This is not just to be nice. This is the architect’s legal duty to the owner.

Yes, bidders have to look at the entire set of contract documents, but if a window treatment sub is getting a whole story by looking at just part of the documents, he’ll save himself some time, and stop after reading those General Notes. In the case above, he may have gotten the wrong whole story, because of the architect’s failure to communicate correctly.

The second message: If you, the architect, can’t get it right for the sake of getting it right, remember the guests, er… bidders. Think about how they’ll feel while trying to solve the mysteries of what you were thinking when you drew something that directly conflicted with other documents. Keep in mind that if you make them feel uncomfortable, or if you cause them to waste precious time during bidding, they will remember you for it!

The whole point of dining etiquette is not about using the right fork – it’s about making sure guests are at ease. We have commonly-accepted guidelines about using the correct silverware so that we are starting on the same page, as much as possible, and so that it’ll be easier for everyone to be comfortable, and have a good time.

This material is really striking, has a great texture, has an interesting color, and is loved by architects.

However, it has some extremely problematic negative aspects… but we might be able to get around some of those.

Check out my latest technical article, published on the website of the Denver Chapter of the Construction Specifications Institute (CSI), “COR-TEN and Other Weathering Steel Alloys in Architectural Applications” . 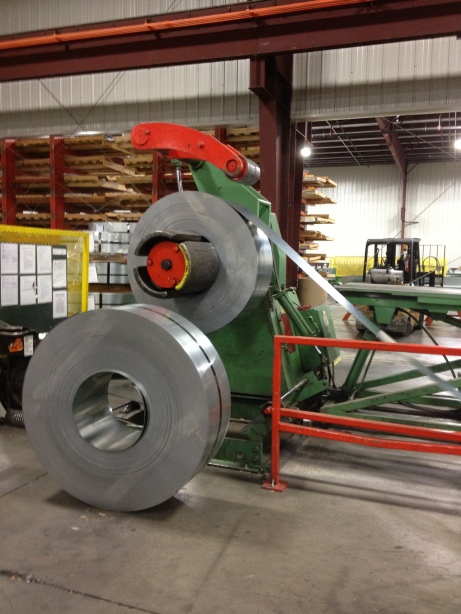 Have you ever wondered why architects’ construction details often have notes that call out “brake metal” (or, possibly, and incorrectly, “break metal”)?

When I was an architectural intern, working on construction documents, I often used details from previous projects to get started on details for a current project. I often wondered, and sometimes asked, “What is brake metal?”

I never got a good answer.

But when I started writing specs, I learned that brake metal is sheet metal that is formed in a press brake. This metal is often specified for sheet metal flashing and trim.

Here’s a press brake in action: 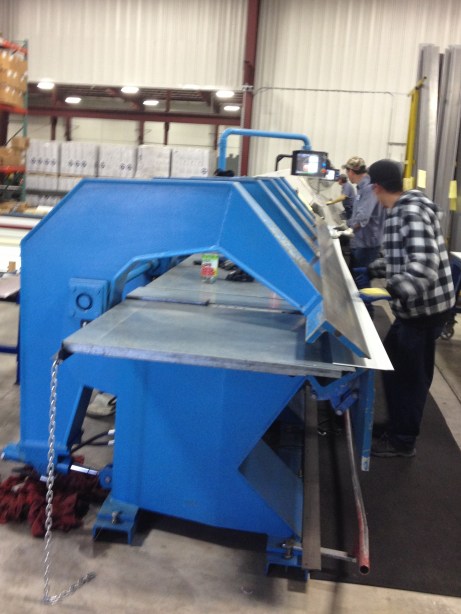 In this photo, above, a length of prefinished sheet metal is being inserted between the male die and the female die of a press brake. Next, the workers will pull up the bottom die, pressing the dies together, which will bend the metal.

Many thanks to Metal Sales Manufacturing Corporation for today’s tour of their Colorado plant, where they roll form tons of sheet metal wall and roof panels every year (and brake form lots of sheet metal trim).

This tour was organized by the Denver Chapter of CSI (the Construction Specifications Institute). If you’ve been considering joining CSI, now is a great time to join, because, for one week starting today, CSI has a 20% discount on national membership (November 9th through 16th). This discount is only available to new members joining at the professional (non-student) level. The discount doesn’t apply to your chapter membership, but chapter membership is where you get great benefits such as this plant tour I wrote about today, so it’s worth joining a local chapter, too! Here are the details:

Join CSI at www.csinet.org/join by Friday, November 16th and pay only $192 for national dues, a 20% savings.